The Masked City is currently at just £1.19 for the ebook on amazon.co.uk (apologies to American readers). It’s only just over a fortnight till The Burning Page comes out – here’s a chance to remind yourself of what happened last time.

And happy Thanksgiving to all who celebrate it.

I’m absolutely over the moon. In the yearly Der Leserpreis awards on lovelybooks.de, The Invisible Library (or in the German translation, Die unsichtbare Bibliothek) has won the silver.

Thank you very, very much, anyone who voted. 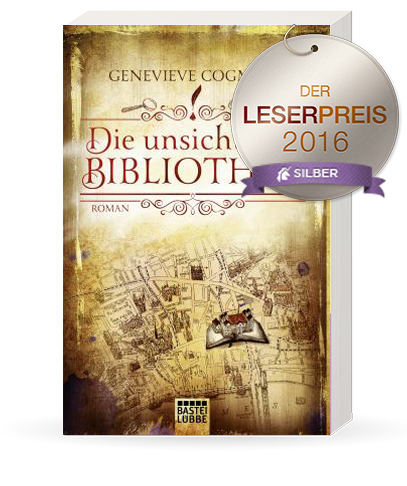 I’m absolutely delighted to find out that The Invisible Library is on Amazon.com’s list of Best science fiction and fantasy of 2016. Seriously. It’s at number 5 in selling order. I’m still trying to convince myself it’s real. This is the sort of thing that people have daydreams about…

And here’s a Publishers Weekly review of The Burning Page:

Cogman’s third Invisible Library novel (after The Masked City), which centers on the enormous interdimensional Library that connects various alternate versions of our world and the doughty Librarians who hunt down rare and magical books, opens with the series protagonists, Irene, a Librarian turned spy, and Kai, her dragon apprentice, placed on probation by the ruling forces of the Library after some unfortunate events involving the dragons and the Fae. Then Irene’s arch nemesis, rogue Librarian Alberich, returns with the intent to disrupt the many worlds he has control over, as well as the Library itself. Irene must intervene, though she fears there may be a double agent in her circle who’s conspiring against her…

Lucienne Diver’s new book Faultlines is out today. She’s my agent, and she’s also an excellent author, and the book is strongly recommended.

Six months ago Vanessa Raines lost her best friend.
Lisa had changed, pushing away everyone close to her, even Vanessa. She had quit soccer. Started wearing dark and dismal clothes. She refused every offer to talk and suffered whatever she was going through in silence. Now she’s really gone. Suicide they claim, but Vanessa knows that isn’t right. It can’t be.
Vanessa blames herself for letting Lisa chase her off. She wants answers, so that she can put to rest the rumors surrounding Lisa’s death and so that she can move on, heal. But Lisa left no note and the journal she was always scribbling in—which might tell all—is mysteriously missing.
As Vanessa struggles to come to terms with the loss of her friend and to reconstruct the last months of Lisa’s life, someone calling themselves “Poetic Justice” begins taking revenge against those he or she thinks drove Lisa to suicide. Everyone at school believes Vanessa is this mysterious “Poetic Justice”. It’s easy to blame the former best friend, and Vanessa makes an obvious target.
Struggling with her own guilt, Vanessa is determined to ignore the threats and allegations aimed her way. But as Poetic Justice’s vengeance takes a darker turn, retaliation against Vanessa begins to escalate, from cyber bullying to violence, putting both her and the little sister she adores in the line of fire. To protect them both, she has to find out who’s behind the attacks before things turn deadly. And hope she can survive the truth…

On my own front, I’ve just found out that The Invisible Library (in its German translation, Die unsichtbare Bibliothek) has been shortlisted for DER LESERPREIS on the largest German book community website, LovelyBooks.de. This is a great honour and absolutely fantastic news, and, um, if anyone felt like casting a vote for me, that would be extremely kind of you.

Voting is at https://www.lovelybooks.de/leserpreis/2016/abstimmungen/fantasy-und-science-fiction/ and will be possible up to the 22nd November. And if anyone reading this is among the people who nominated me for the award, then thank you very much indeed.

The title and cover of Library book four are up! And even a few details of the plot!

(With many thanks to the cover designers for fantastic work…)

The Invisible Library is currently a Kindle Daily Deal on Amazon (US only, sorry) at $1.99. Check it out at: